Access to agri-finance remains one of the biggest challenges facing African farmers; especially women and youth entrepreneurs aspiring to start and maintain agribusinesses.

This was confirmed in a report by Heifer Project International conducted among 30,000 youth across the continent last year.

To address the problem, Heifer International is leveraging technology to stimulate disruptive innovations that will impact the Agricultural food systems to ensure food security and create jobs for youth at different stages of the value chain. 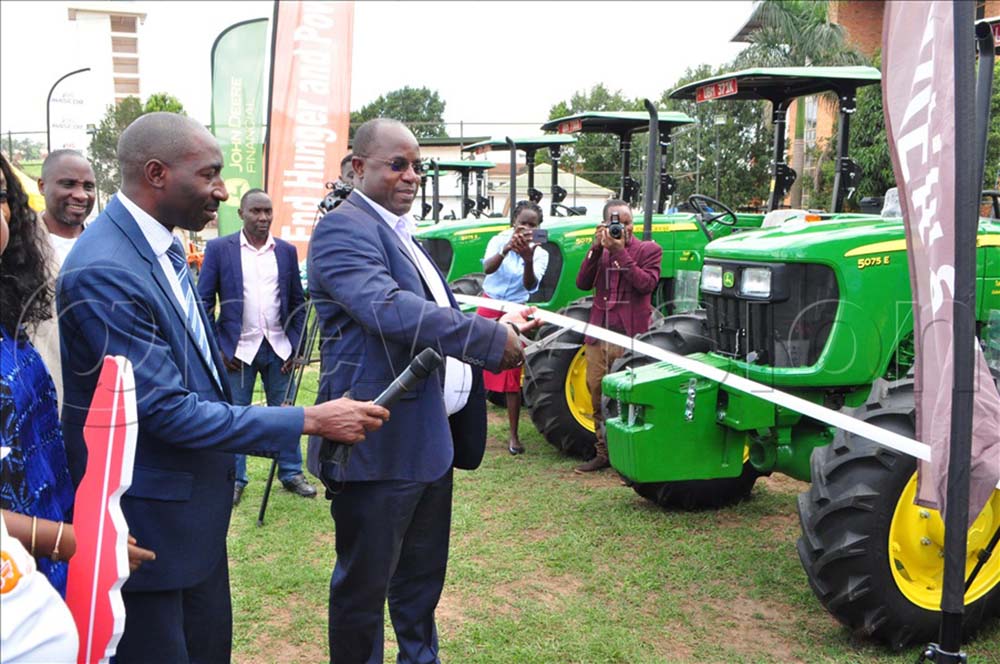 Fred Kyakulaga Bwino, State Minister for Agriculture cuts a ribbon during the commissioning of Pay As You Go (PAYG) held at Kati Kati, Lugogo as William Matovu, Country Director, Heifer and others look on. (Photos by Shamim Saad)

Today Heifer International announced an investment of USD 4.5m over the next 10 years in the tractor booking platform- Hello Tractor. This was during a function held at Kati-Kati restaurant in Lugogo, Kampala.

During the function, 11 tractors were handed over to local youth entrepreneurs drawn from across the country. The “Pay-As-You-Go (PAYG) Tractor Financing model has already attracted the participation of youth in the districts of Dokolo, Lira, Gulu, Kole and Mubende, and Abim, districts.

Fred Kyakulaga Bwino, State Minister for Agriculture speaking during the commissioning of Pay As You Go (PAYG).

According to the Heifer International Country Director William Matovu, only 40% of Africa’s arable land is being utilized due to a lack of the necessary equipment to open it for production.

“The mechanization gap in Uganda has put the country at the back-peddle of achieving sector objectives, with the potential to affect the country’s aspiration to achieve the Vision 2040. It is not surprising that Uganda imports USD 35M worth of food annually to meet its production deficit. This is despite the opportunities such as its relatively fertile soils, good climate, cheap labor, and a ready regional export market among others.”

Speaking at the handover ceremony, Bwino Fred Kyakulaga, the state minister in charge of Agriculture noted that the model unveiled today is in line with the government’s initiatives aimed at improving the agricultural sector and empowering smallholder farmers.

“As you know the biggest challenge the agricultural sector faces is access to affordable financing and this limits output and contribution to the GDP. Women and the youth are the most affected, but with this model, we are confident that the problem will be covered. We now have to focus on disease control, quality of seeds, and generally dealing with climate change”

William Matovu, Country Director, Heifer International speaking during the commissioning of Pay As You Go held at Kati Kati, Lugogo.

Emmanuel Obedigum, the manager of Alito Joint Multipurpose cooperative society Ltd, Kole district whose group has benefited from the model had this to say about the model.

“Alito Joint farmer’s cooperative was among the tractor recipients in June 2022 under the PAYG financing model. The timing was perfect as the tractor was placed at the beginning of the second planting season in 2022. Since then, we have been able to plough an additional 140 acres and deposited Ushs 3,510,200 in the Hello Tractor account to finance our loan.”

Heifer International Uganda believes that this model will make tractors accessible to thousands of smallholder farmers via the increasingly popular Hello Tractor leasing platform; sometimes referred to as Uber for tractors.

Fake Seeds: Govt Moots Law To Clamp Down On Distributors

No comments to show.

@2021 - All Right Reserved. Designed and Developed by PenciDesign